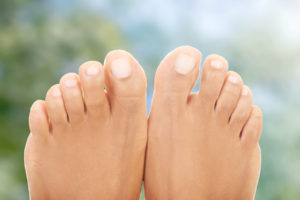 One of the most common disorders of the foot is a fungal infection of the toenail, affecting about half of Americans by the age of 70. Fungus infections occur when and if microscopic fungi gain entry through a small trauma in the nail and when left untreated, can spread to other toenails—at times, even as far away as the skin on the feet or even to the fingernails. Severe cases can impair one’s ability to walk, can lead to painful ingrown toenails, and can result in more serious health conditions – not to mention the actual loss of the nails. It is vitally important to seek professional care right away if you detect signs of any serious infection.

The most common signs of toenail fungus– a.k.a. onychomysis–are easy spot, as they are visually and painfully obvious. Symptoms may include everything from thickened nails, pain, dry or brittle texture, shape or color distortion in the nail, as well as foul odor and a separation of the nail from the nail bed (onycholysis).

The infection that usually occurs with a fungus—most commonly dermatophytes— initially infects one single nail by entering through a crack or opening. Often painless, it allows the nail to become thickened, discolored, and eventually causes it to crumble from brittleness. There may also be white or yellow patches if the nail has been lifted from the skin underneath it (i.e. nail bed). The fungus may also spread to and infect other nails.

Because many of these signs and symptoms can also be found in other nail and skin conditions, it’s recommended that the nail is assessed by a doctor. Proper diagnosis of the condition can mean proper treatment.

In its early stages, nail fungus infections are only visible with a texture or color change, appearing sometimes merely as a white or yellowish dot under the nail. Because the change is only aesthetic, it is often dismissed as nothing more than a bother.

However, initial symptoms, though seemingly harmless, actually go on to aggravate the infection and accelerate the growth of fungus if not properly looked at. The early stages are the best time to start treatment — before the onset of the mid-level or moderate stage when the nail will thicken to the point that it may become painful for the sufferer, especially when wearing gloves, shoes, or doing activities applying pressure to the infected area.

If untreated in this stage, the fungus will spread from one spot to the whole of the nail, or even to other nails. At this point, the whole nail is usually a yellowish or other odd color.

During the last and most advanced stage, the fungus-infected nail turns abnormally thick and extremely brittle because of the spread of the fungus, causing the whole nail or part of it to detach from the nail bed. Sometimes, the infection will also spread to the surrounding skin and nails.

Onychomycosis is an all-around expensive and time-consuming nail disorder to treat, especially when reaching a severe stage. This is why it is highly important to detect any signs of infection early on before nail fungi infections get worse. Skip the headache, the pain, and make your condition more manageable by seeking treatment immediately or as soon as humanly possible.

If you’re ready to learn more about the stages of toenail fungus or eliminate your toenail fungus all together, contact Juvanail to seek a variety of treatments to rapidly improve nail health, end toenail pain, and most importantly, to drastically improve on nail clarity. Perhaps even try out the Cool Touch FootLaser, a FDA-approved toenail fungus treatment exclusively offered by physicians at Tower Foot and Ankle Surgery. Go ahead and eradicate that toenail fungus once and for all!