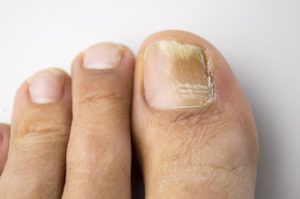 For the most part, nail fungal infections are generally not life-threatening, and because early signs and symptoms do not provide any type of discomfort, they are easily ignored or dismissed. Leaving nail fungus untreated for a long while, however, can often lead to serious health complications, as well as cause major foot and nail pain—not to mention the spread of the fungal infection to other areas of the body as well. Severe cases can impair one’s ability to walk.

Toenail fungus should therefore be treated as soon as early signs and symptoms are present even if the issue is not entirely bothersome. Brown or black spots and white streaks often signify the onset of an infection and often later progress to more evident changes where the nail thickens or develops a rougher surface.

It is vitally important to seek professional care right away if you detect signs of any serious infection in and around the toes. Below is a handy guide to the dangers that might inevitably occur if and when toenail fungus is dismissed or ignored. What does toenail fungus look like?

Many a times, the growth of fungus can cause the separation of the nail from its nail bed, especially in the late stages of a nail fungal infection when the nails become thick, hard, weak, and brittle. All of this allows the nail to more easily chip, crack, or break, and if continually ignored upon, may lead to severe nail damage and loss of the entire nail. On some occasions, the loss of nail can be permanent.

Over time, a nail infected with fungus can become thick and misshapen, causing a lot of pain. It can even get to the point where it becomes difficult to walk when wearing shoes, especially after a long period of being ignored and untreated. Often times, a change in footwear may be deemed necessary.

Nail fungal infections are highly contagious and if left untreated, can spread to the surrounding skin on the foot, resulting in athlete’s foot, a condition marked by itchy, red, cracked skin (people who wear heavy footwear and sweaty socks all day are more susceptible to the spread of nail fungal infections to the other areas of the feet), or jock itch, where the infection spreads to the genital areas of both men and women.

When asking what does toenail fungus look like, there are various other bodily infections that are risked when a nail fungal infection is ignored. Nail fungal infections, as mentioned, contaminate the surrounding skin and when the skin becomes cracked and open, bacteria can easily enter and create widespread infection all over throughout the body. Cellulitis, for example, is a condition that produces swollen, red, tender skin and demands immediate treatment with antibiotics, as the infection will enter the bloodstream and be deadly.

Delaying the treatment of toenail fungus until its latest stages can go on to be excruciatingly challenging. For people with other diseases and or existing conditions, avoiding the onset of severe fungal infection of the toenails or fingernails – a.k.a. onychomycosis — is essential. The dangers that involve the end-stage nail disease can lead to even more harmful situations for individuals such as these.